Ticket comments represent the conversation between requesters, collaborators, and agents. Comments can be public or private.

For information on comments in requests as opposed to tickets, see Request comments.

If you set the author_id, the user with the id is shown as the author of the comment. However, this user is not considered the updater of the ticket. The authenticated user making the API request is the updater. This has implications for business rules and views, such as the requester updated attribute and current user conditions.

Each comment can be flagged by Zendesk for several reasons. If the comment is flagged, the metadata property will have a flags array with any of the following values:

A flags_options object will also be included with additional information about the flags.

The flags and flags_options properties are omitted if there are no flags.

Instead of adding a written comment to a ticket, you can add a voice recording of a comment. In the agent interface, a voice comment includes controls to play or stop the voice recording: 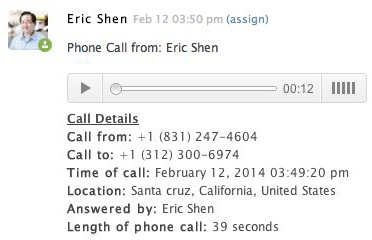 You must provide a url to a hosted voice recording. Zendesk doesn't store the recording file: it stores a link to the file. The audio file must be a MP3 or WAV file.

A Talk account is not necessary to add voice comments to tickets.

To add a voice comment to a new or existing ticket, include a JSON object named "voice_comment" with the following properties:

Ticket comments are created by including a comment object in the request body when creating or updating the ticket. Example:

Permanently removes words or strings from a ticket comment. Specify the string to redact in an object with a text property. Example: '{"text": "987-65-4320"}'. The characters of the word or string are replaced by the ▇ symbol.

If the comment was made by email, the endpoint also attempts to redact the string from the original email retained by Zendesk for audit purposes.

Note: If you use the rich text editor, support for redacting formatted text (bold, italics, hyperlinks) is limited.

Redaction is permanent. You can't undo the redaction or see what was removed. Once a ticket is closed, you can no longer redact strings from its comments.

To use this endpoint, the "Agents can delete tickets" option must be enabled in the Zendesk Support admin interface at Admin > Settings > Agents.