If you make a lot of API requests in a short amount of time, you may bump into the API rate limit for requests. When you reach the limit, the Zendesk API stops processing any more requests until a certain amount of time has passed.

The rate limits for a Zendesk Support account are outlined in Rate limits in the Support API docs. Get familiar with the limits before starting your project. 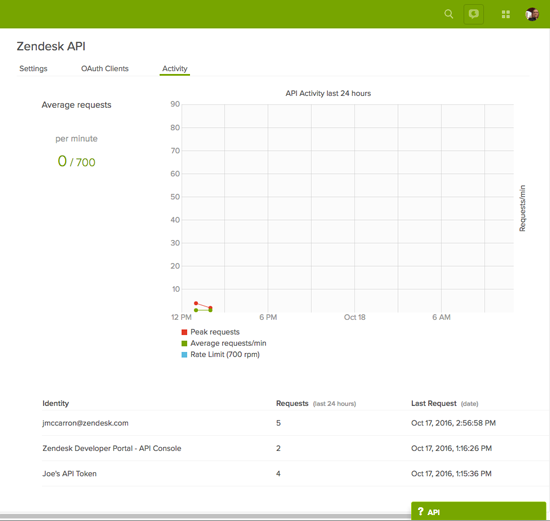 You can also use the following response headers to confirm the account's current rate limit and monitor the number of requests remaining in the current minute:

For each request, you can check to see if you've bumped into the rate limit. If you get a response code of 429, "Too Many Requests", you've hit the rate limit.

It's best practice to include code in your script that catches 429 responses. If your script ignores the "Too Many Requests" error and keeps trying to make requests, you might start getting null errors. At that point the error information won't be useful in diagnosing the problem.

For example, a curl request that bumps into the rate limit might return the following response:

The 429 status code means too many requests. The Retry-After header specifies that you can retry the API call in 93 seconds. Your code should stop making additional API requests until enough time has passed to retry.

Reducing the number of API requests

Make sure you make only the requests that you need. Here are areas to explore for reducing the number of requests:

If you regularly approach or bump into the rate limit, consider including a process in your code that regulates the rate of your requests so that they're distributed more evenly over time. This is known as a throttling process or a throttling controller. Regulating the request rate can be done statically or dynamically. For example, you can monitor your request rate and regulate requests when the rate approaches the rate limit.