In the previous tutorial, you read about the app design requirements, installed the Zendesk CLI, and downloaded an app template with starter files to build a Sell app.

In this tutorial, you'll specify the app's location in the Zendesk Sell interface, install the app privately, and learn how to develop apps locally. The tutorial covers the following tasks:

Setting the app's location in Sell

You can run a Zendesk app in different locations in the Zendesk Sell user interface. In this tutorial, you set the app's location to the right sidebar of the Person page:

To set the app location in Sell

Your Zendesk app will live in an iframe in the person_card location you specified in the previous section. Like any iframe app, developing a Zendesk app consists of combining static and dynamic elements in the HTML file to be displayed in the iframe.

The main HTML file index.html is located in your root app project folder. Open the index.html file in your code editor and rename the title to "Sell OAuth Mailchimp Tutorial App". Save the file.

To interact with the Apps framework, the HTML file imports the ZAF SDK library in a script tag:

The SDK provides a ZAFClient global object that allows cross-frame communication between your app and the host Zendesk product. After importing the SDK, you can use the ZAFClient.init() method to create an apps API client:

The client provides an interface between your app and a host application such as Zendesk Sell. The client gives you a number of methods to interact with the Apps framework. Use the get() and set() methods to read and write data in the framework APIs. Use the invoke() method to run methods in the framework APIs. Use the request() method to make HTTP requests to any REST API. Use the on() method to listen to events. For details, see the ZAF Client API doc. Due to the nature of cross-frame communication, every interaction between your iframe and the framework happens asynchronously.

The client is initialized in the src/index.tsx file inside a root <App/> component. To initialize the client only once, the React useMemo hook is used.

The <App/> component will be rendered in the div container with the id 'app'.

The div is defined in the index.html file between the <body> tags.

The React Context is used to make the client accessible to the component tree without having to pass it down manually at every level.

<ZAFClientContextProvider> is a part of the @zendesk/sell-zaf-app-toolbox package. The package contains methods, hooks, and components to help you build and integrate React apps with Zendesk Sell quicker and with less effort.

The <EntryView/> component is wrapped in <ThemeProvider> delivered by the @zendeskgarden/react-theming package to provide default global theming for nested components.

Zendesk Sell exposes the Apps Sell API which may differ between locations. The API defines the events and objects that you can use to build apps in Zendesk Sell.

Since the app will be displayed in the the Person Card location on the right side, one of the available objects is the contact object. In this object, you'll use the email address property.

The EntryView.tsx file (src/EntryView.tsx) is an app component which makes two HTTP requests and then displays the data.

Next, you'll install the app in your Zendesk Sell instance and check how it works.

Installing the app in Sell

Note: You can only upload and install private Sell apps on the Sell Growth plan or above. The Sell account must also be linked to a Zendesk Support account.

Before installing, the app needs to be validated and then packaged as a zip file for uploading. In your command line, run the npm script: 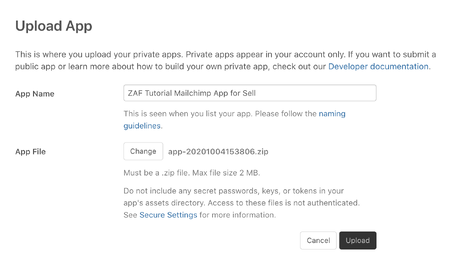 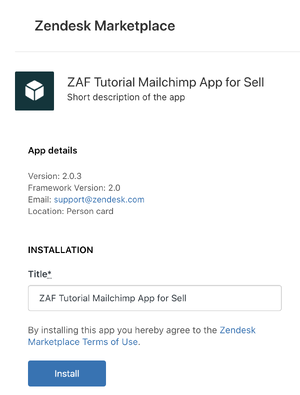 Once you have your app installed, you'll check the app works and is displayed in the right place. First, a contact person will be created and then the card is viewed to see the app is visible.

The email address will fetch audiences that are connected with the particular person.

You should see the app in the Person sidebar.

The Zendesk CLI (ZCLI) includes a local web server so you can run and test your apps locally as you're developing it.

Note: It is recommended to use private browsing or the Incognito mode in your browser when testing and developing apps. Your browser may cache certain files used by the app. If a change is not working in your app, the browser might be using an older cached version of the file. With private browsing, files aren't cached.

In this tutorial, you established an app location and installed the app in your Zendesk Sell instance. For now, you can shut down the server by switching to your command-line interface and pressing Control+C.

In the next tutorial, you'll implement the OAuth authorization flow. Continue to Part 3: OAuth 2.0 setup.