In this five-part tutorial series, you'll learn how to build a React app for Zendesk Sell from start to finish. The app will use the OAuth 2.0 authorization framework which authenticates an app's API requests to Zendesk.

This tutorial covers the first steps to building the app:

The other tutorials in the series teach you how to build and install the app:

This tutorial series uses the Zendesk Apps framework (ZAF) React Skeleton for Sell Apps to build an app. It is intended for experienced web developers who are comfortable working with advanced web tooling such as Webpack, Node, and npm packages, among other technologies.

Because the tutorials build on each other, tackle them in order and finish each tutorial before moving on to the next one.

To download the completed source code of the app in this tutorial, click sellmailchimptutorialapp.zip. You can review the code as you follow along or check your work.

Note: Zendesk provides this article for instructional purposes only. Zendesk does not provide support for the content. Please post any issue in the Zendesk Apps framework (ZAF) community, or search for a solution online.

You should have a good idea of how your app will look and work before you start working on it. The app is designed to list audiences to which a Sell contact subscribes. Learn more about the Mailchimp audiences.

To fetch audiences from Mailchimp, you'll need to set up OAuth to make requests to the Mailchimp API. The app will have a simple interface with a list of audiences. Each item will display the audience name and the number of subscribers. Here's a mockup of the app interface: 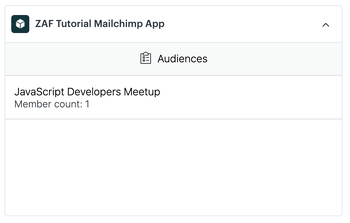 The app will appear in the right sidebar when viewing a person card in Sell.

When a user opens a person card, the app will automatically make a HTTP request to the Mailchimp API for audiences related to the person. The app then lists the audiences the contact has subscribed.

First, you'll need to clone and download the app scaffold template which allows you to bootstrap a React-based application.

Next, install the dependencies.

The Zendesk Command Line Interface (ZCLI) is a tool which allows you to perform the following tasks:

Installing ZCLI is a one-time task. Once installed, you can use ZCLI for all your Zendesk app projects. Follow the instructions in Installing and updating ZCLI. You also need to authenticate ZCLI with your Zendesk account. See Authentication in the ZCLI documentation. After you're done, return here to continue the tutorial.

If you have already installed ZCLI, make sure you are using the latest version.

Read the ZCLI apps section to get familiar with the commands used. However, don’t run the $ zcli apps:new command since the template includes all the starter files necessary to build the app.

Inside your cloned app project, the ZCLI commands are available as npm scripts which you can run in your command line tool. They can be found in the package.json file under the 'script' property. For example, to build your app you run $ npm run build which runs zcli apps:validate and zcli apps:package to validate and package your app. You’ll use those commands later.

Note: ZCLI replaces the Zendesk Apps Tools (ZAT), which are in maintenance mode. To use ZAT instead, refer to Installing and using ZAT.

In the apps template folder you previously cloned, the dist folder contains all the required files to be included in an app to install it in Zendesk Sell. See File requirements for more information.

The src folder is where the source code lives. You can add as many files as you need when building a app. The provided files will help get you started.

The project also includes README.md where you can find information about creating an app for Zendesk Sell.