In this five-part tutorial series, you'll learn how to build a Zendesk Sell app from start to finish. The app you'll build is called Learn about Sell. This tutorial covers the first steps to building the app:

The other tutorials in the series teach you how to build and install the app:

Because the tutorials build on each other, tackle them in order and finish each tutorial before moving on to the next one.

To download the completed source code of the app in this tutorial, click learn_about_sell.zip. You can review the code as you follow along or check your work.

Note: Zendesk provides this article for instructional purposes only. Zendesk does not provide support for the content. Please post any issue in the comments section below or in the Zendesk Apps community, or search for a solution online.

To build and upload a private app in Sell, you must have Zendesk Sell on the Professional plan or above.

You should have a good idea of how your app will look and work before you start working on it. The app you'll build in this tutorial is called Learn about Sell and is designed to list articles about deals in the Zendesk Help Center. It'll have a simple interface consisting of a button. Here's a mockup of the user interface: 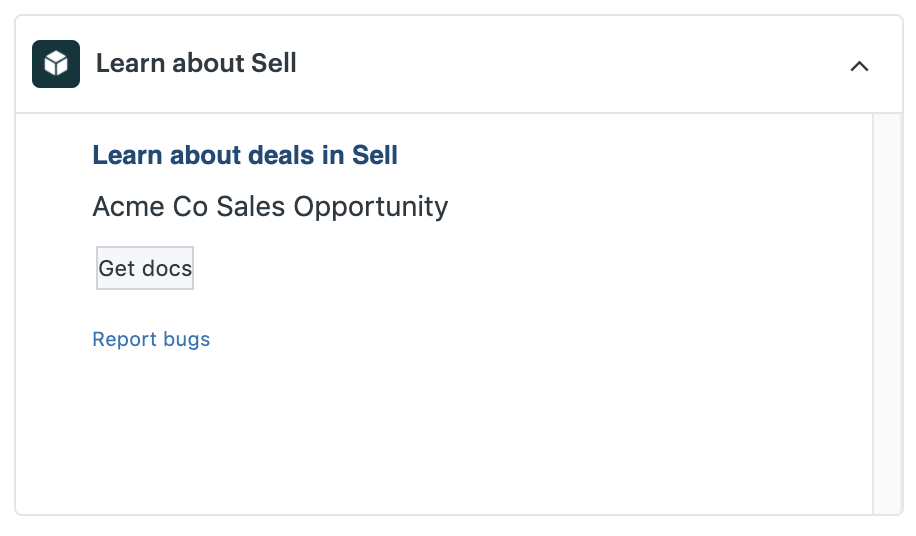 The app will appear in the right sidebar when viewing a deals card in Sell.

The app should work as follows:

In this section, you'll install the Zendesk app tools (also known as ZAT). Among other tasks, the tools let you perform the following tasks:

Installing the tools is a one-time task. Once installed, you can use ZAT for all your Zendesk app projects.

Follow the instructions in Installing and using the Zendesk apps tools. After you're done, return here to continue the tutorial.

If you have already installed Zendesk app tools, make sure you are using the latest version. To update, in your command-line interface, run $ gem update zendesk_apps_tools.

After installing the Zendesk app tools, you're ready to start building the Sell app. The first step is to create the starter files for a new app called Learn about Sell in a folder called learn_about_sell.

To create the app files

Everything is in place to start building. In the next tutorial, you'll learn more about the HTML file to be iframed into the Sell window. You'll change the heading, add a footer, and add some styles to meet the design requirements specified in Planning the app above. Get started: Part 2: Designing the user interface.