The conversations your organization has with customers appear as tickets in Zendesk Support. The Support SDK allows customers to use your app to create tickets, update existing ones, or see when their tickets have been updated by the customer service team.

All four Support SDK activities, including the Help Center activities, let the user create tickets. The following activities also let the user view and update one or more of their tickets, and give you more control over tickets in your app:

Note: Tickets in Zendesk are also known as support requests, or simply requests.

It's important to note that RequestActivity does not poll for updates to the ticket, as ticketing is an asynchronous communication pattern rather than a synchronous one such as chat.
The "Confirmation Message" setting in the Zendesk Support admin page should be customized and used to set the user's expectations for when they will receive a reply.
A true chat-like experience can be achieved using push notifications to trigger refreshes of the conversation on-screen.

The RequestListActivity lets you show a list of the user's tickets. The user can review and update their tickets.

If you need to build your own ticket UIs, the SDK also has an API provider that gives you access to tickets in Zendesk Support. See RequestProvider in the Support SDK Javadocs.

Topics covered in this section:

There is no prerequisite for letting users create tickets.

There is a prerequisite in order to let users view their tickets and update them.
A Zendesk admin must enable Conversations for your app setting in Zendesk Support. See Configuring the SDK in Zendesk Support in the Support Help Center

The default submit ticket screen of the RequestActivity looks as follows: 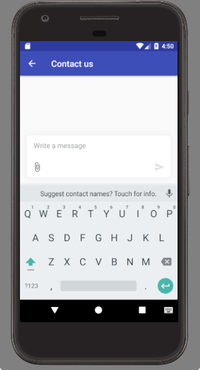 The default ticket list of the RequestListActivity looks as follows: 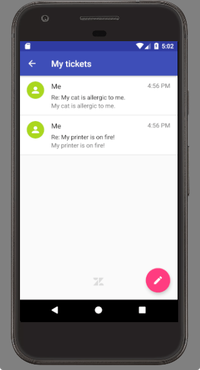 A bullet appears next to a ticket to alert the user when an agent has updated the ticket.

You can change the look and feel of the activities' UIs. See Customizing the look.

Use the show() method of the RequestActivity builder. Example:

If you prefer, you can use the ticket screen in the RequestListActivity, HelpCenterActivity, or ViewArticleActivity activities. The UI of each activity has a floating action button that lets the user open the ticket screen.

Use any of the following methods of the RequestActivity builder:

See the methods listed above in RequestActivity builder.

Create an intent to show the ticket screen

Use the intent() method of the RequestActivity builder. Example:

Configure the ticket screen of other SDK activities

Use the config() method of the RequestActivity builder. Example:

Use the show() method of the RequestListActivity builder. Example:

If using an anonymous identity, RequestListActivity only shows tickets created on that specific device, even if the user creates other tickets on other devices with the same email address. This restriction doesn't apply to JWT identities. RequestListActivity shows tickets created by a JWT user on any channel (such as on the web or on other mobile devices).

Any tickets that have new or unread comments are displayed in a highlighted state in the list to draw the user's attention.

The unread status is determined and tracked on the device, which means that the read/unread state is not shared across multiple devices for JWT users. JWT tickets created in other channels (such as other devices) are displayed as unread the first time they're retrieved from the network and displayed in RequestListActivity.

Closed tickets are displayed in a greyed-out state with a message saying the ticket has been closed. The ticket can still be viewed by a user, but cannot be updated. You can disable the display of closed tickets in the Zendesk Support admin page.

If conversations are disabled in the Zendesk Support admin page, RequestListActivity logs a message and closes as soon as it has been started. Viewing a list of tickets is disabled because it's part of the conversations feature.

If conversations are disabled in the Zendesk Support admin page, RequestActivity logs a message and closes as soon as it has been started. Opening an existing ticket is disabled because it's part of the conversations feature.

If you are using JWT authentication, the user's tickets submitted from other channels appear in their ticket list. They show as unread the first time the user views the ticket list, because the read/unread state is stored on the device. Viewing each ticket resets it to the read state, and any new updates after that cause the ticket to appear unread again.

You can use an API provider to check if any of the user's tickets have been updated, and then alert the user based on the response. The RequestProvider has a getUpdatesForDevice() method that checks for ticket updates. If any are found, you can alert the user elsewhere in your app and perhaps use the RequestActivity to show each ticket.

The method caches requestUpdates for up to an hour. Any subsequent API call in that timeframe returns the cached object rather than making the API call.

Viewing a ticket removes it from the cached RequestUpdates object. The event occurs when the ticket's comments load in RequestActivity.

If you've integrated push notifications for request updates, but have implemented a custom request UI and aren't using Support.INSTANCE.refreshRequest(), you can mark a ticket as unread when a push update is received: