This hands-on tutorial shows you how to build a functioning Android application in 30 minutes that lets users access your Help Center directly from the mobile app. The app also lets users submit support requests to your agents in Zendesk Support.

The tutorial uses the Support SDK for Android, a shared code library that lets you easily incorporate different Zendesk customer support features in Android applications. Zendesk has other options for providing customer service in mobile apps:

Though this quick start guide provides step-by-step instructions to build a simple application, it's not an Android app tutorial. If you're new to Android development, I highly recommend working through the lessons in Building Your First App on the Android website.

The guide walks you through the following basic steps for adding Zendesk customer support features to an Android application:

The tutorial uses version 5.0.2 of Support SDK. It was tested in version 4.2.1 of Android Studio.

Disclaimer: Zendesk provides this article for instructional purposes only. Zendesk can't provide support for third-party technologies such as Java, Android, and Android Studio. Please post any issue in the comments section below or in the Zendesk SDKs community, or search for a solution online.

This section shows you how to create a quick sample project in Android Studio. You'll use the project to try out the Support SDK.

Android Studio creates all the files and basic settings for your project. You can view the files in the Project navigator on the left side of the screen. If you don't see the files, click the first icon (the folder icon) on the upper side of the panel. 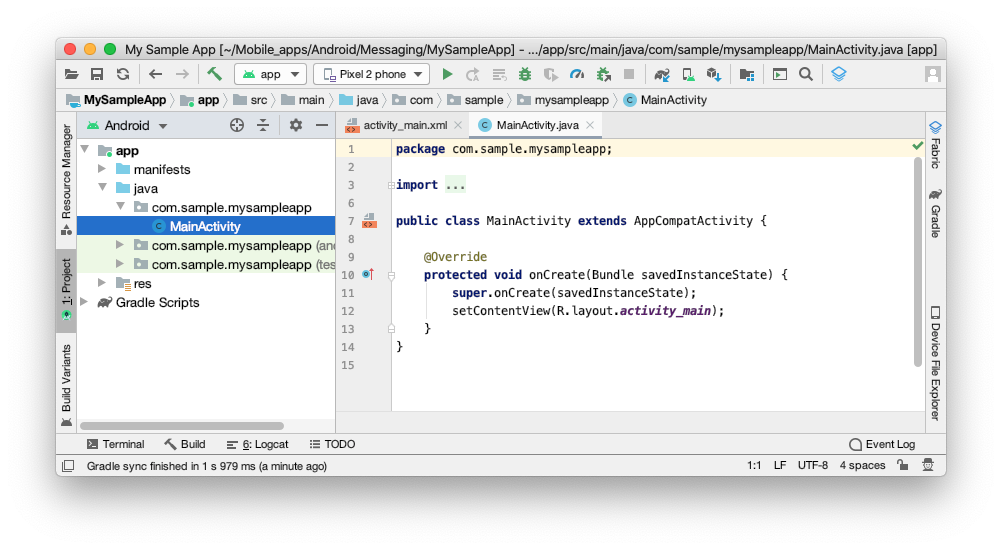 Adding the Support SDK to the project

Before going any further, make sure you successfully added the Support SDK to your project. One way is to run a test build in a phone emulator. The application doesn't do much yet, but if you don't get any build errors you know you're on the right path. You might get some build warnings but you can ignore them for now.

You can use the emulator that’s included in Android Studio. First, you'll need to create an Android Virtual Device (AVD) definition for the emulator. Your AVD definition will specify the characteristics of an Android phone. In this case, you'll define a Pixel phone.

Consider the test a success if you don't get any build errors.

Before a user can use a Zendesk customer support feature on their device, the application has to create and prepare an instance of the Support framework. The initialization process involves setting initial values and performing other setup tasks.

In this section, you'll update the sample application to initialize the Support SDK dependencies and make it ready for use. The task consists of the following steps:

Adding the initialization code to your application

Android applications are event driven, so you need to initialize the SDK in an event handler. By default, your application comes with an onCreate(Bundle) event handler that runs when an instance of your MainActivity subclass is created. You can add your own code to this event handler.

The Help Center feature in the Support SDK is designed to open in response to an event such as a button tap.

Your default sample project consists of a ConstraintLayout containing a TextView that displays "Hello World!". The application's layout is defined in the activity_main.xml file in the res/layout folder:

If the Design view is displayed, click the Code button in the upper-right corner of the editor window.

You'll change the layout to a vertical LinearLayout containing a single Help button.

Adding an event listener for the Help button

You'd like your app to open Help Center when the user clicks the Help button. To do so, you'll need an event listener that detects the click event, then opens Help Center.

That's it. The completed MainActivity subclass should look as follows:

You should have the following import statements at the top of the file:

Build and test the application in the emulator. After tapping the Help button, your Help Center should open in the app and let you browse and search the content.

Note: If you do not see the Help Center, delete your app from the emulator and run a build again.

The Help Center also lets users submit support requests (tickets) and view their open requests. Tap the speech bubble on the lower-right to try it out.

At this point you should have a working Android application that lets users open your Help Center and browse content. Use this sample application to experiment with the rest of the framework.

For example, you can limit the number of articles displayed by specifying a list of section or category ids. You can also scope the content by supplying a list of labels. See the developer docs to learn how.